Mothers find ways to feed their babies due to formula shortages

You are here:
NYC 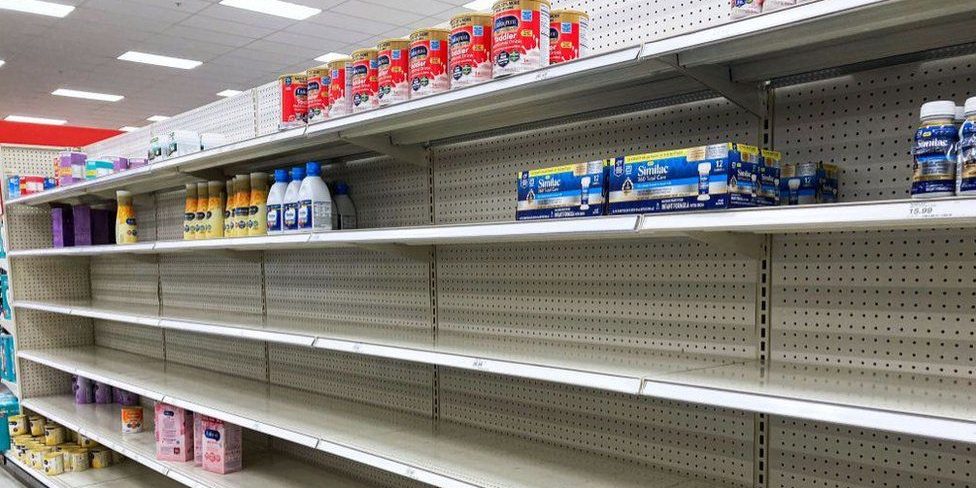 Mothers find ways to feed their babies due to formula shortages

90% of the formula in the United States is made by four companies. Abbott Labs is one of the top four producers, manufacturing 43% of US infant formula. Even though formula shortage began in the early days of the pandemic and got worse with subsequent labor shortages, the problem was exacerbated after Abbott Labs’ plant in Michigan was closed in February following a recall by the Food and Drug Administration (FDA) for possible bacterial contamination in several of its brands.

Diana Cortez, a 27-year-old mother, has had problems finding formula for her 6-month-old baby for the past four months. She feeds her son both formula and breast milk, but prefers to bottle feed him.

Her son eats 8-10 times a day, using one can of Enfamil a week. Enfamil is one of the most common brands of infant formula for newborns, infants and toddlers; so it was strange for Cortez to start seeing that she could not find it at Target and Costco as usual.

Cortez had to breastfeed her baby more to make the few cans of formula she could get her hands on last longer. She tried to change the formula to Gentlease, but her baby didn’t like it and started having stomach aches.

Together with other friends who are also mothers, Cortez ventured to look for formulas in different stores and supermarkets. They told each other where they had found and bought formula. Due to the scarcity and high demand for the product, vendors limited the amount of purchase per family.

Breast milk banks have reported an increase in demand for milk and donations in response to the shortage. However, these milks are generally reserved for premature babies and those with high-risk health conditions.

This has led to the informal sale or exchange of formula and breast milk. Mothers with an excess supply of both are donating through formal and informal channels to help parents struggling to feed their babies amid the crisis.

Cortez learned about the exchange of breast milk by other mothers, but preferred not to resort to this solution because of the care a mother has to go through to properly breastfeed her baby. While she breastfeeds, a mother has to maintain a balanced diet, stay hydrated, pay attention to what she can eat and what not, etc.

Breastfeeding strengthens the baby’s immune system. The mother’s white blood cells produce antibodies that not only protect the mother but are also secreted in the milk to protect the baby. But breast milk can also carry risks of contamination, disease transmission, and exposure to harmful drugs and medications, which is why the American Academy of Pediatrics and the FDA advise against this breast milk exchange.

Some parents have diluted formulas to stretch their supply. Others have introduced cow’s milk, almond or soy milk, juice or solids before their children are developmentally ready. Google searches for homemade formula recipes increased by 2,400%, and hospitalizations of babies for bad reactions to new formulas and mineral imbalances in homemade formula have also increased due to the sensitivity of babies’ stomachs and intestines.

Fortunately, Cortez has had an easier time finding formula for her baby lately. Due to the closure of the Abbot factory, other baby formula companies have increased their production to counter the nationwide shortages, Enfamil being one of them, increasing production by 30% and making more frequent deliveries to stores.

Abbott Labs’ plant in Michigan reopened on June 4, but closed less than two weeks later after severe weather led to flooding in some areas. While they re-sanitize the plant and ensure the facility is safe to resume production for a second time, the company is facing FDA investigations for the deaths of babies who presumably drank their formula back in January.

For AID FOR AIDS and AID FOR LIFE, the health and well-being of children and mothers in any part of the world has always been a priority. According to the World Health Organization (WHO), 45% of child deaths around the world are associated with malnutrition. Infant and young child feeding is critical to improving child survival and promoting healthy growth and development. The first two years of a child’s life are especially important, since optimal nutrition during this period reduces morbidity and mortality, as well as the risk of chronic diseases, and improves general development.

Families and children in difficult circumstances need special attention and practical support, as do babies whose mothers have HIV. Current antiretroviral treatments allow these children to be exclusively breastfed for up to 6 months and continue to be breastfed for at least 12 months with a significantly lower risk of HIV transmission. For AID FOR AIDS and AID FOR LIFE, these mothers and babies have always been of even greater importance, as we help them with medications and treatments, as well as food supplements for babies to reduce the risk of malnutrition.

Over 34% of Venezuelan children under five years of age are malnourished
24 June, 2022