Skip to content
paises
This upcoming Saturday, December 7th, AID FOR AIDS and New York City Council Speaker Corey Johnson will be hosting a Medicine Drive at AIDS Memorial Park as a way to commemorate World AIDS Awareness Month. The medicines collected will go towards our Medicine Recycling Program, allowing us to continue guaranteeing access to treatment to thousands of people in developing countries.

“We are thrilled to partner with NYC Council Speaker Corey Johnson in conducting this medicine drive. It was actually right by the AIDS Memorial Park, at the former Saint Vincent’s Hospital, that we started collecting leftover medicine and sending it to people who desperately needed it in developing countries,” says AFA Founder and Executive Director, Jesus Aguais. Since then, AFA has collected and redistributed over $140 million worth of unused and unexpired medicines to over 20,000 people in 59 countries.

This medicine drive is a great initiative to celebrate the great strides that New York City has made in achieving the 90-90-90 goal stablished by UNAIDS by getting its residents diagnosed, treated for HIV and helping them achieve an undetectable status that translates into being unable to transmit the virus to others. The city stands as a leading example in HIV prevention and treatment, including a recent uptake for PrEP which is extremely effective as a tool to protect people from getting HIV and ending the AIDS epidemic.

Become a Hero and join us this Saturday December 7th at the AIDS Memorial Park between 11am and 3pm to donate your unused and unexpired medicines to our Medicine Recycling Program. Help us spread the word through social media by using the hashtag: #everypillcounts and #donatetosave 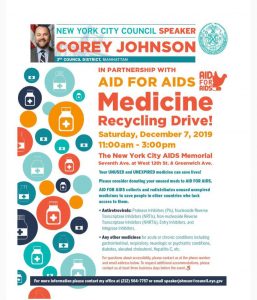