The Executive Director of AID FOR AIDS (AFA), Jesús Aguais, explained that in the midst of the crisis currently involving Venezuela, health is one of the most affected sectors, specifically people with HIV. “An estimated 10,000 Venezuelans with HIV have left the country, and this also collapses the region. Colombia is where the largest number of Venezuelans with HIV have gone. The health system in that country is not as friendly for these people to enter, especially until they legalize their status and that is where organizations like AFA are currently working.”

He recalled that Non-Governmental Organizations (NGOs) are the ones that have handled the most cases of Venezuelan migration, “the world was not prepared for this and even less in regards to people with HIV.”

In an interview with TV Venezuela, Aguais reported that there is an estimated 30% of people in the world who are currently unaware of having HIV, “In Venezuela the number is even greater and it is because there is no access to rapid tests, not even CD4 which works for cell counting. The viral load test that measures the virus in the bloodstream is so important because if a person is undetectable, it means that they do not transmit the virus, so it is not transmitted to another person. But for the last four years that test has been unavailable in the country, not even reagents to know if a person is positive.”

For him, the Venezuelan health system collapsed in such a way that it has become one of the most challenging countries in the world in this area. And although Aguais did not give an official death toll for people with HIV, it did compare that in 2015, when the last official death toll was known, the official data pointed 2,500 people while “only in the Carabobo state last year, there were more than 2500 deaths due to lack of medication.”

And although TLD antiretroviral could reach a population of 55 thousand people with HIV, they do not deliver the medication, “it is the regime that is guilty of not reaching them and that only puts them at risk of acquiring other opportunistic diseases such as malaria, making it even more dangerous due to the lack of medications to fight them.”

Finally, the director of the NGO that reaches 59 countries worldwide, said they expect nothing from anyone, much less from the Venezuelan regime, “we remain committed to save as many lives as we can.” 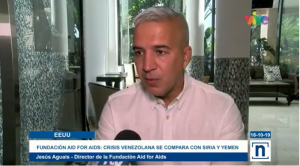